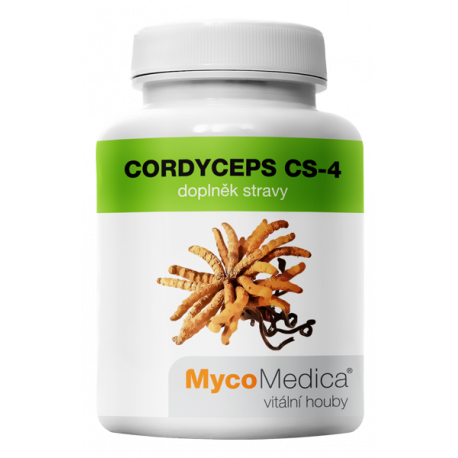 Cordyceps is one of the most valuable mushrooms of Chinese medicine.

It can be ordered in gelatin or vegetarian capsules (vegetarian ones are also suitable for vegans). If you are interested in a sold-out variant, please write us an e-mail.

Cordyceps (Chinese caterpillar) is one of the most valuable fungi of Chinese medicine. Choose the ideal ratio of polysaccharides, cordycepin, D-mannitol and other bioactive substances for the best results. In Chinese medicine, it is used to promote vitality, physical performance, endurance and to promote libido.

Increased dose: 3-10 capsules a day (it is advisable to consult a doctor or a Chinese medicine practitioner)

Take the capsules on an empty stomach (at least 30 minutes before or 60 minutes after a meal), drink water or weak green tea

When using vital mushrooms, we recommend increasing the intake of vitamin C, which increases the absorption of active ingredients. For example, in the form of an extract of the Brazilian cherry Acerola

Warning: The product is not intended for children under 3 years, for pregnant and lactating women. Do not exceed the recommended daily dosage. Keep out of reach of children. The product does not serve as a substitute for a varied diet. It does not contain caffeine, gluten, preservatives, dyes or sugar.

The products on this site are dietary supplements. They are not medicines and cannot be confused with prescribed medicines.

Cordyceps sinensis (Dongchonxiacao, Chinese caterpillar, Caterpillar mushroom, Ophiocordyceps sinensis) belongs to the genus Cordyceps, which also includes Cordyceps militaris, Cordyceps liangshamensis, Cordyceps gunnii, etc. (almost 700 species have been discovered). Its spores attach to the surfaces of insect larvae and then fill the entire box with their sclerotia, from which a mature fungus grows. Cordyceps grows at altitudes above about 3500 meters, mainly in the mountains of Tibet, in the Chinese provinces of Sichuan, Yunnan, etc. The fungus is harvested from April to August. However, there is little to find in the wild. Apparently, the incidence has decreased by 90% over the last 25 years, which of course has increased its value on the market, and therefore this fungus is also grown artificially. The demand for Cordyceps is mainly due to its effects on human health. The power of Cordyceps has been used by traditional Chinese and Tibetan medicine for thousands of years. There are stories that describe how yak pimps noticed a change in animals when they grazed Cordyceps. The animals were more vital, stronger, healthier and more potent. Written records can be traced back to 620 AD Cordyceps has been known to the Western world since 1726, when it was introduced at a mycological conference in Paris. But then the Western world had no idea about the effects of Cordyceps. However, this changed, albeit much later, due to the fact that in 1964 Cordyceps was officially registered among herbal medicines in Chinese pharmacology.